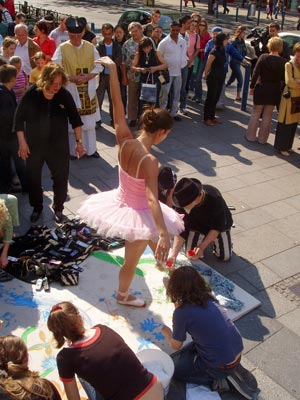 In 2007, Lubo Kristek initiated the series of happenings Requiem for Mobile Telephones to protest against the addiction to modern technology. The visitors were exhorted to renounce their ‘electronic pets' that then were drilled through by a three-breasted angel and became part of the artwork bearing the same title as the happening cycle. The assemblage changed shape from event to event.
The artist rode to the second happening at Vienna's Mariahilfer Straße on horseback. He already had mobiles from the previous event on his coat with a long veil. Children from Austria, Poland and the Czech Republic helped him to paint the assemblage's background. Kristek invited a ballerina to capture dance patterns in the artwork. He dipped her pointé shoe to the paint and let her dance on the canvas. Then, the by-standers added their mobiles to the composition.