Web-born publication Kristek Thaya Glyptotheque was published under ISBN 978-80-905548-3-2. It brings detailed information about the birth and development of sculptural pilgrims’ way along the river Thaya in the context of life of its creator.

The art historian and anthropologist Barbora Půtová (Charles University) is focusing on life paths of the sculptor, painter and performer Lubo Kristek: 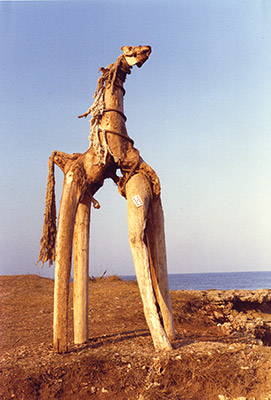 ‘Over the course of his life, Kristek has visited various places around the world. He enjoyed wandering through the landscape and tried to discover and understand its essence, as he did with its inhabitants and their way of life. These were trips, drifting and wandering which had an inner meaning for his life and work, because when wandering through an alien landscape and culture one can free oneself of the things one knows or feels that one knows about the world in advance. All of a sudden, people can perceive things and phenomena in the present and existentially enhanced moment. In this way, Kristek returned to the prototype of the man who strode through the landscape, had an opportunity to stop and think, and who left his own trace and imprint on it. (...)

Kristek has left his artistic footprint in the landscape on the coast of Cantabria. It is the assemblage Barbed Wire of Christ (1983), the metal body of which is a pitiful relic of the current mechanised, dehumanised, rationalised world. Some time later, in 1986, he created the assemblage Sea Horse on the Italian coast. This wooden figure of a horse with a skull instead of a head, and with clumps of rope representing the mane and tail, is a symbol of life in motion and the galloping waves of the sea. The horse here becomes the guide on the journey through this life and to the next one.’ 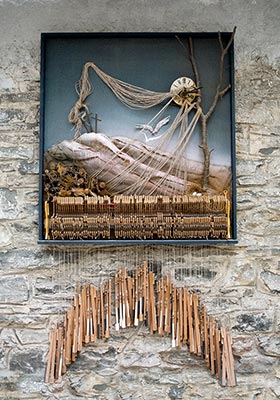 ‘Kristek transforms the assemblage into modern types of altars and tabernacles. The assemblages are distinguished by an exceeding of the concept of the paiting and the frame. Through his assemblages, Kristek creates a platform from which he can escape from the strictly prescribed space or go beyond material or other objects. Just as with other works, the assemblages generally bear the designators of the psychoanalytic dictionary, but they also include hidden archetypal patterns and ideas. Kristek’s assemblages speak for themselves and are truthful about themselves. (...)

He has incorporated musical instruments or strings into several assemblages, for example On the Landfill of Ages (1994) and Metastation of Abandoned Tones (1975−1976). His greatest artistic object is the grand piano located in the course of the happening A Cart Full of Tones of 1994 on the roof of his painting studio in Podhradí nad Dyjí. In the same way as other foreign postmodern artists, through the technique of assemblage, Kristek has deconstructed and artistically reinterpreted the postmodern situation of man in the “fluid” era of globalisation.’ 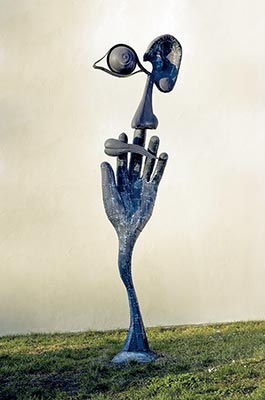 ‘Just like a medieval artist, Kristek personally welds, grinds and carves his sculptures. From many aspects his free-standing sculptures represent a surreal parallel with the paintings of the Czech painter Mikuláš Medek (1926–1974), the German painter Max Ernst (1891–1976) and the Spanish painter Salvador Dalí. This is documented in particular by Kristek’s metal sculptures Monument to the Five Senses (1991) and Tree of the Aeolian Harp (1992).

In dreamlike and fantasy themes, Kristek puts the creative aspect of a Freudian world of unconscious and concrete irrationality(53) into direct opposition with the one-sided, rational, usual and conventional world.

Kristek also complies with the basic principle of surrealism – the principle of spontaneous creation of the shape from chaos in which he listens to the stimuli linking man with nature. Kristek opens the gates to mental and natural underground resources.’ 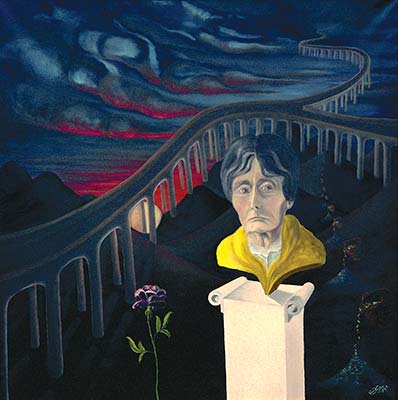 ‘In his paintings from the 1970s, we can find the theme of the bridge and road. The road, frequently bordered by the arches of bridges, rises and disappears into the unknown. The artist himself calls it the heavenly highway – it appears, for example, in the painting The Heavenly Highway of Aunt Fränzi (1974–1975). A desire to join and make a pilgrimage to spirituality is reflected in it. Kristek Thaya Glyptotheque, which he built in the years 2005 and 2006, is the vital linkage of the artist's artistic and spiritual development. He linked together the sculptures – in which he achieved monumentality, craft qualities and spiritual scope – in a pilgrims’ way dedicated to the river Thaya. He invites those who visit his sculptures to take a walk through the landscape. (...)

The trail on which Kristek located his artworks runs through the Czech Republic, Austria and Slovakia. It consists of eleven symbolic stations – a gallery in the landscape and a pilgrimage route made up of new artefacts created for a specific space or Kristek’s older works. The artworks in various places fulfil a whole range of functions, from acting on the viewer in the form of preparation for the spiritual climax of the pilgrimage, to the role of a focal point indicating and emphasising the place of a spiritual, philosophical or artistic act. (...)

Wandering from one station to the next gives them an additional dimension to contrast with the predominant consumer lifestyle of our society. The pilgrimage here becomes a “ritual of purging, an act of humility, a rejection of the pride of reason.” Kristek Thaya Glyptotheque is a creative projection of the human relationship with the river Thaya. (...) With the Thaya Glyptotheque, Kristek participates in the activation and creation of a space in which there is an oscillation of nature and culture in the broader geographical, historical and social context.’

The whole book is online (for free) here.